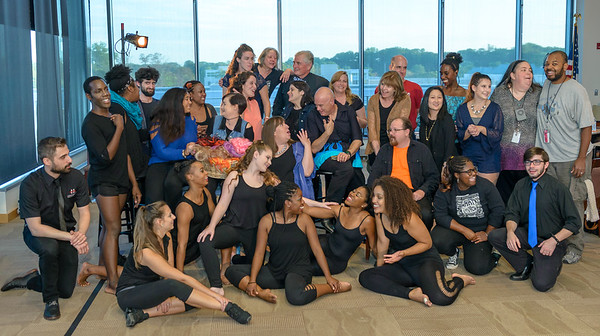 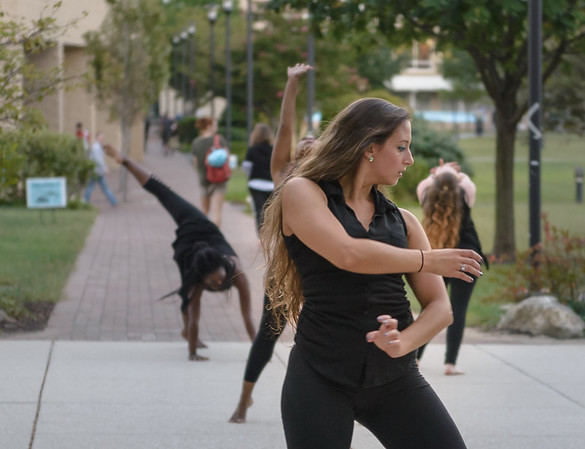 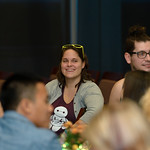 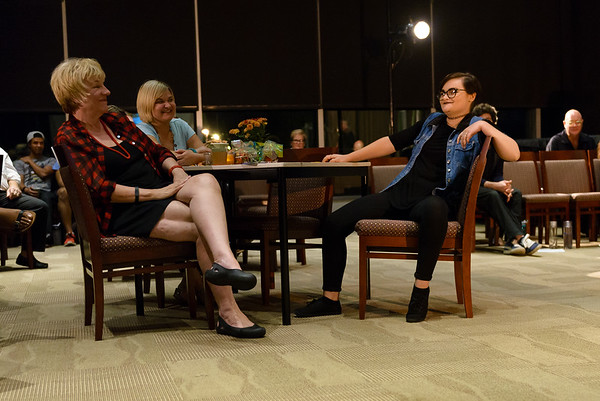 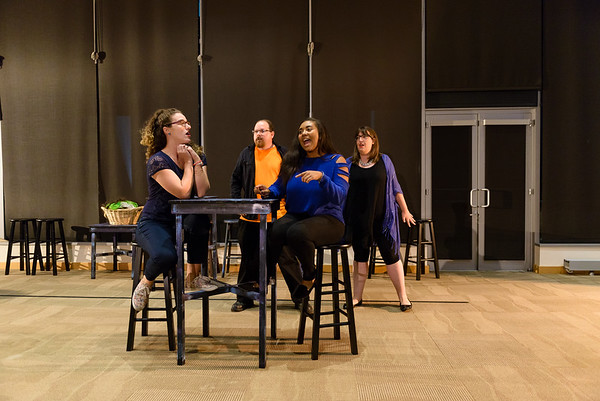 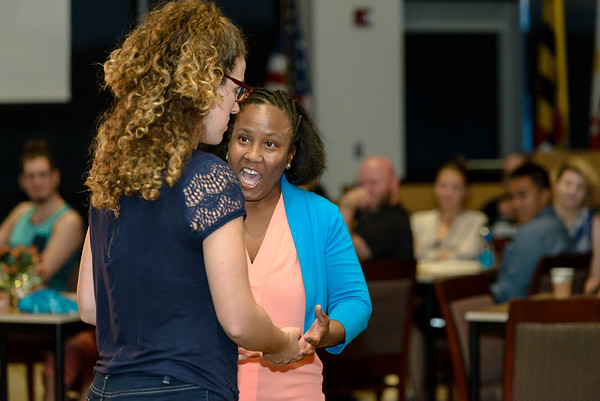 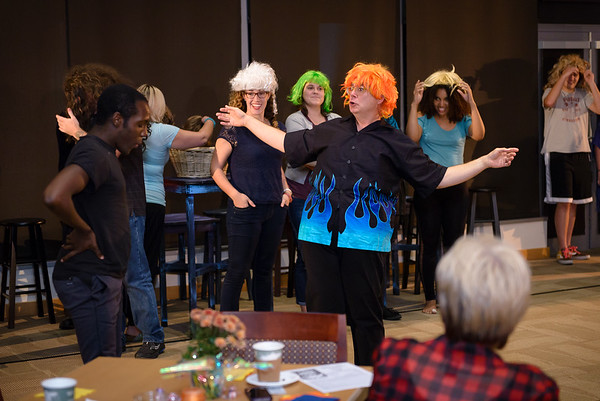 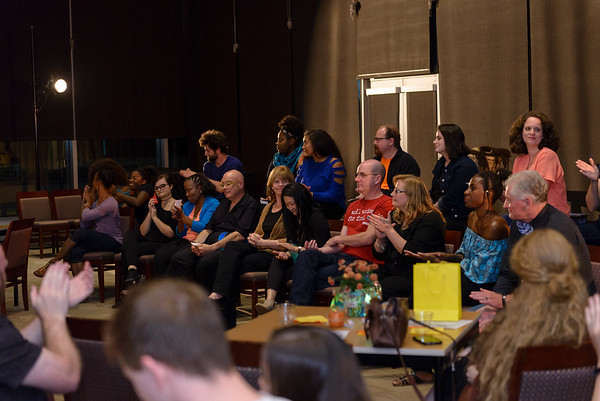 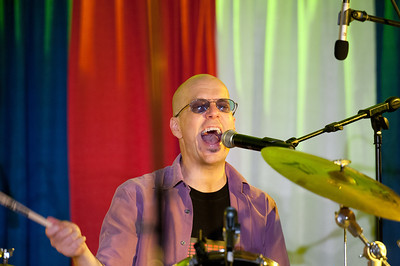 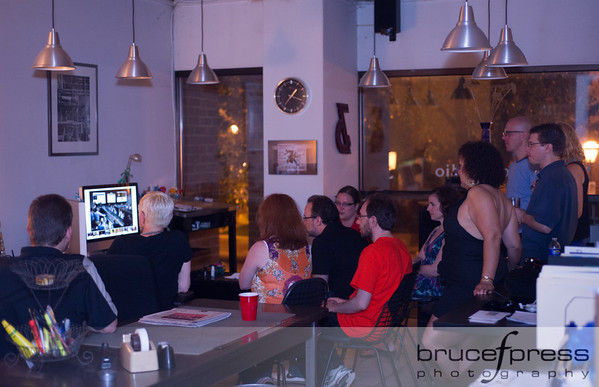 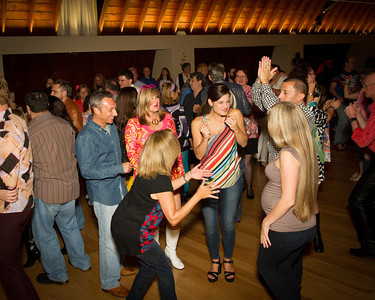 Noises off is a wonderful farce of tax evasion, mistaken identity, theft, trysts and SARDINES!

This latest incarnation staged by Silhouette Stages at Slayton House in Columbia, MD is an amazing undertaking for a community theatre. The set is large and stately. The cast is tight and energetic. (Full Disclosure: My lovely wife, Julie, plays Belinda)

So, what was my involvement?

First of all, I shot all the separate headshots and created the poster you see to the left here. The challenges there probably deserve a blog post on their own.

There were also a couple of cast photos like the one here on the right.

I also spent a number of days helping out on the shop-filling monster of a set.

Then, I went in and got a great preview of the show by shooting production stills. Yes, you’ll see the set isn’t done and only two days before opening. Theatre people will understand, of course, this is not as rare as one would hope. The situation for this show was even worse as access to both stage and shop was limited by Slayton House as they had other commitments. So, the set did not see the stage until the Sunday before opening Friday.

The show is in three acts. The first act takes place on the front of the set, where our actors are in dress rehearsal the night before/morning of opening for their play.

Act two takes place back stage, weeks later. While the show goes on in front, our audience is treated to backstage shenanigans that are mostly silent but not at all quiet. The final act is played in front on the final stop of the tour. Things have not exactly gone well and one might think the cast is a bit over the show at this point.

It really is a fun show. I’m hardly objective, but you needn’t take my word for it. The reviews have been stellar. 5 Stars from DC Metro Theater Arts! and from the Baltimore Sun. So, go out and support local theatre!

This coming Friday, December 11th, the Horowitz Center at Howard Community College will host the What Improv Group? for their holiday-themed show, “It’s a Wonderful W.I.G.”

I’m treated very well by the various groups I’ve worked with in the HCC theatre community. Their is a little less “we’re doing our thing, please keep up” and a bit more “do you have all the shots you need” than other groups I work with. Which is both a gift and a burden. As someone who is more used to being a fly on the wall, it is a little disconcerting to have attention paid to my shutter, but I have a little more control to be sure to get the shots I need.

I was first introduced to W.I.G. just a few months ago, when I decided to see one of their shows. Their director asked if I would be willing to take some shots of the new cast since I was going to be in attendance. I was fine with this, although it did leave my wife alone for a chunk of the show.

We thoroughly enjoyed their hi-jinks and looked forward to the next show. Which will, unfortunately, occur while we are on vacation. However, I did get a preview last night while taking these shots.

I’ve never done improv, but I’ve watched both the good and the not so good. I’ve also talked to many performers about it. So, I feel I can safely say that improv is hard. Those that can both put themselves out there

and creatively be in the moment

Are rare. There is some really great talent in this group and I can comfortably recommend a fun evening out. So, why don’t you try a W.I.G. on for size? It just might be wonderful.

Donate a Children’s Picture Book & Receive a Treat in Return! Details below!

W.I.G. takes on the holiday season with jingley-jangley improv surprises for all! Take a break from the hustle-bustle, bring the whole family (ages 8 and up only please!) and join W.I.G. for improv holiday fun!

W.I.G.’s holiday improv show promises joyful, beyond hilarious and sentimental on-the-spot, interactive holiday storytelling, including audience participation for the kids! Ring in the holidays with W.I.G.!

Donate a Children’s Picture Book in Exchange for a Free Intermission Treat:  Get into the wonderful spirit of the season by bringing to the show a new or gently used hard-cover children’s picture book (books suitable for infants to five years old), which will be donated to Howard Community College’s Children’s Learning Center “Library for Little Readers,” and receive a free treat at intermission, courtesy of Arts Collective!

This performance is recommended for ages 8 and up!

More Information and Tickets for “It’s a Wonderful W.I.G.”

I really love shooting these dance performances. They are some of my most challenging assignments. Why? Really? Fast movement…

And no idea where to shoot or what is coming next.

All while trying not to ruin the experience for the paying audience. The best of times, the worst of times. I honestly don’t know if I have anything until I  get home. That makes the solid shots so much more gratifying.

Every one of these shots feels like a huge win. Oh, I actually got a few more than these too and I haven’t been through the whole set yet.