Red Branch doesn’t usually do a photo session early in the production schedule to create styled images for promotional use. When they contacted me to do these I was more than happy to jump in. Sweeney Todd is a show I really like and have good familiarity with.

I  spoke to the production staff to get a scope on the job. It would be shots of the two main characters Sweeney Todd (Russell Sunday) and Mrs. Lovett (Janine Sunday).

I  knew I  needed to play up the theme of their season, “Paint it Red”, and keep with the dark malevolence of the show. So, I expected to shoot in the big orange room rehearsal space that is my onsite studio and photoshop a context. With this in mind I stopped by the theatre the afternoon of the shoot to make sure I was on the same page as them.

It’s a good thing I did. While there I spoke to Chester, one of their set designers, who offered me some reclaimed building materials from his father’s yard. It couldn’t hurt to look. Right? Oh man. This stuff was perfect! It consisted of some really old, dirty corrugated steel siding and wooden shutters that looked like they had to be literally dug up. We set them against a wall in the big orange room and Chester produced bailing wire to “secure” the shutter to a nail hole in the siding. Instant set! 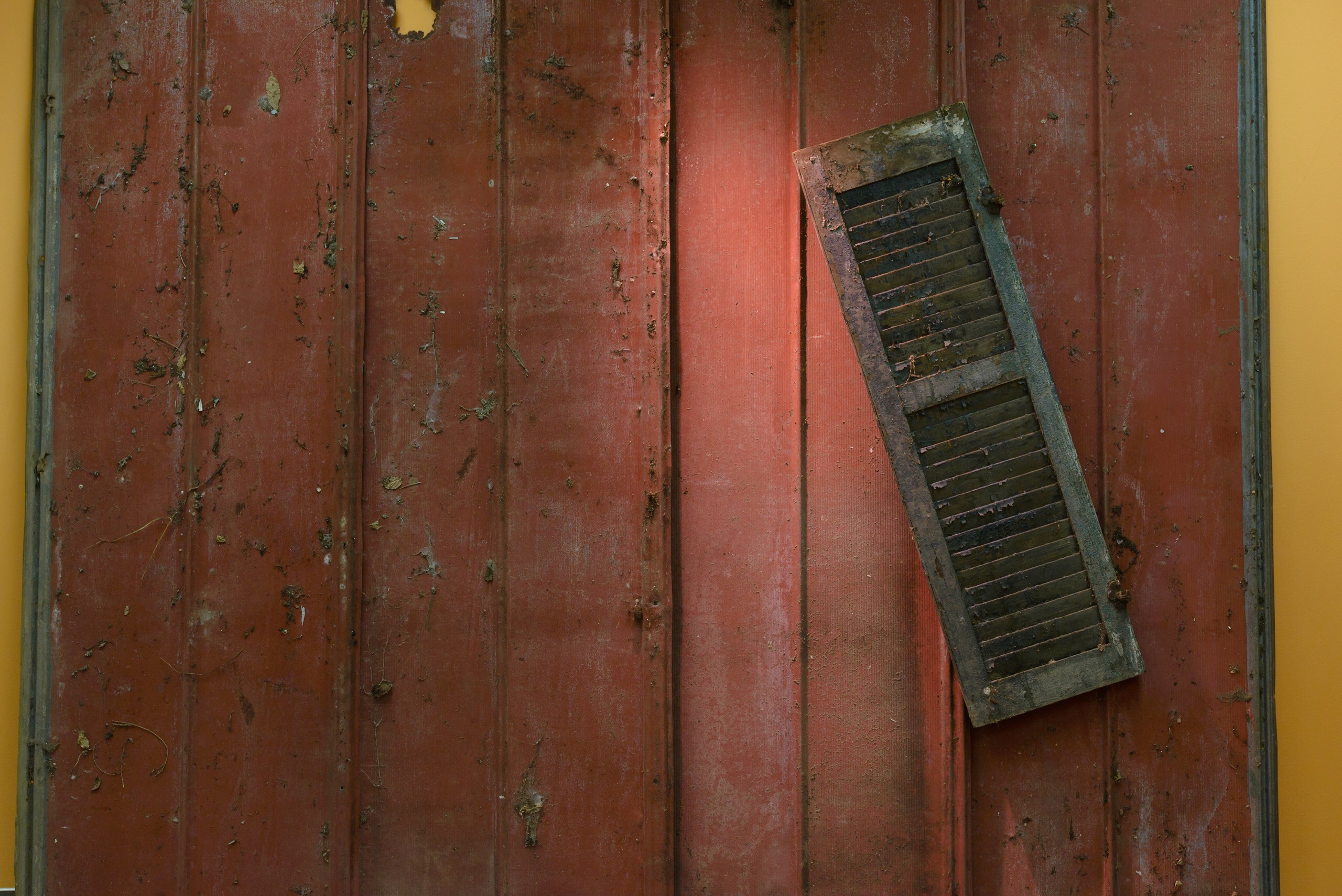 I think that looks fantastic, but it doesn’t quite have any mood to it yet. I only had 3 location speedlights with me for this shoot. I felt I could definitely dedicate one to the background. The look I wanted was a wash on the wall from a streetlight over head. So, I put one of my speedlights (the Nikon SB-800) with a RogueGrid and an Orange-y RogueGel on a boom arm to get it over the middle-ish of the background. By under-exposing the background and setting the white balance to daylight, I started to get the effect I wanted.

I almost had the look I wanted, but I thought Sweeney wasn’t menacing enough. I decided a light blue gel on the MagGrid lighting him, would give me more of the effect I wanted.

With a little post-processing, this gave me the look I wanted. That post-processing involved adding in a razor, since we were running ahead of the props department.

This gave me my Sweeney set up, but the client also wanted shots of Mrs. Lovett. Lovett is no less scary than Sweeney, but she’s somewhat more light-hearted. I didn’t want her to be as cool as Sweeney. So, she was shot with a warmer gel (1/4 CTO)  on the Rogue Flashbender 2 XL Pro to soften the shadows a little and control the spill onto Sweeney and the background.

Again, there was a bit of photoshop to add the rolling pin and razor (a different razor this time) and toning to get the look I wanted.

So, it was a great shoot. I was able to execute my vision in very short order (about an hour, really) which can be important to some clients. Especially, when you are working into a production schedule.

I’m looking forward to meeting the rest of the cast and working with them for headshots and production stills. I like opportunities to stretch my skills and make some creative decisions in studio sessions. This doesn’t always happen when I am taking cast headshots for theatrical productions. They are often fit into a very small window of time before a rehearsal and at times the casts are quite large. Like 28 people large. In a window of about 90 minutes. That’s OK, it’s the job and I’ve gotten more adept at it over the years.

For RBTC’s “Peter Rabbit” they asked for character shots. So, I knew this could be a little different than the usual white background setup. I arrived early enough to talk to the costumer prior to setup. I found out the color scheme leaned toward earth tones and oranges. So, I quickly ditched the white or grey backdrops and went with a very pale brown.

This didn’t seem interesting enough, so I gelled a flash rust color to punch that up. (Turned out, after white balancing, it ended up pretty close to the wall color. Ha!)

I went with a shoot-through umbrella for a soft and forgiving key light, since I didn’t really know what the costumes would be like and a 1/4 CTO gel to keep the subject from ending up too pasty.

A reflector to balance out the shadows and I was ready to go after setting a custom white balance. I also took a selfie with the X-Rite Colorchecker Passport to double down on the color correction just in case the walls caused a weird cast.

Here’s a preview of images straight out of the camera (with only a little tonal correction).

I think the choices worked out well for these images and I’m really looking forward to shooting production stills next week and getting a preview of this world premiere show.

What happens when an impish bunny disobeys his mother’s command to hop through a big, scary vegetable garden? Find out as the rabbit we all know from our childhood collides head on with a rag tag group of new friends that set off on unforgettable adventures. This exciting new musical adaptation by local composer and Red Branch Company Member Dustin Merrell marks Red Branch’s first ever world premiere.