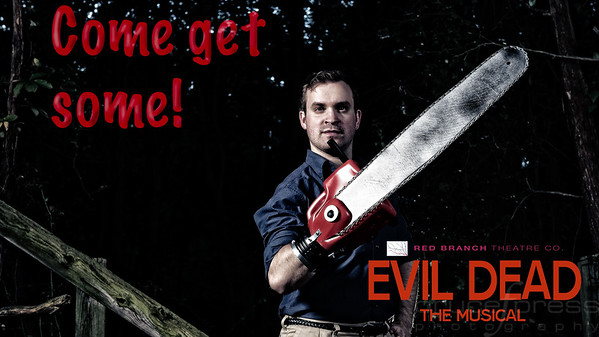 As I mentioned last week in Getting your foot in the door I’ve been pushing for more creative opportunity with Red Branch Theatre Company. Back in the early Spring I started talking to them about creating new photography for their Heathers: The Musical production.

Unfortunately, scheduling and budget didn’t work out for that and we decided we would make something happen for Evil Dead: The Musical opening in October.

While not really a horror fan, I love the comedic horror of the original Evil Dead movies. I wanted the shoot to honor those movies and their original posters. 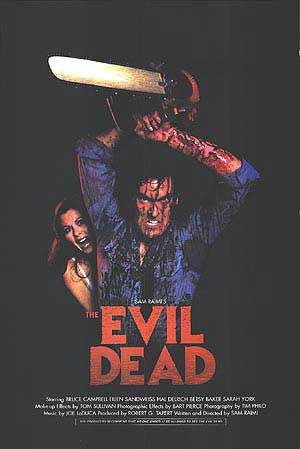 As is typical with this kind of collaborative effort, you start with some pretty grandiose ideas and the reality of coordinating schedules, location and (yes, again) budget quickly bring you down to earth.

I had hoped to spend the time scouting looking for an actual cabin in the woods that we could shoot at. We did drive around Howard County a bit looking for a suitably creepy spot. 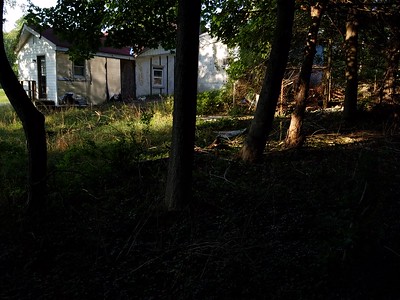 The location was actually in a neighborhood and the, apparently, abandoned house might have been an opportunity for getting arrested for trespassing more than a photo op.

The day before we were scheduled to shoot, I scouted around the theatre. When I saw there was one of Columbia’s ubiquitous path’s leading into the woods down the street 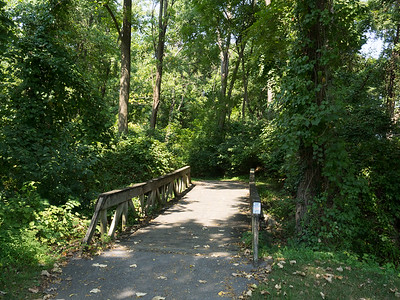 I decided to explore back in the woods there, not even a quarter mile from the theatre… and look what I found. A creepy old fence in the middle of the woods. Not a cabin, but decent enough window dressing. 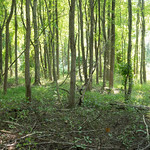 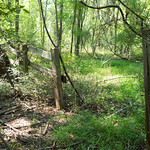 So, we now had a location and we just needed to get our models.

Originally, RBTC production staff had thought about providing me with one or two leads for the shoot. In the end they provided me with the entire cast and took the hit in the rehearsal schedule, which was amazing. We also got the services of their makeup artist, Hannah Fogler, and their costume designer, Andrew Malone, to make the Deadites look awesome for the shoot. My assistant, Allie Press, who is also a trained makeup artist helped Hannah get through the large number of cast members in a timely manner. 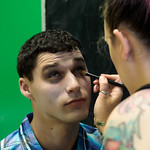 While the cast was getting made up, I sacrificed my assistant to that process and went to set up lighting in the woods. It was my hope that by shoot time, around 7pm, it would be cool in the woods. However, this was still early September in Maryland. It was hot and ridiculously humid. You wouldn’t know it by how fantastic the cast looked or behaved. 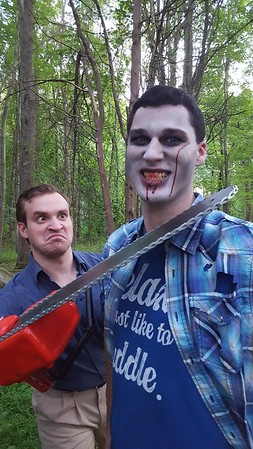 Lighting was an interesting affair and there was a bit of trial and error getting our setup. My concerns were having enough light from the front so I could see good detail in the actors’ faces, so I used my pretty powerful Godox AD360II with a small Godox portable Octabox as my key light and a Godox Ving V860 with a shoot through umbrella for fill. This still left the need to provide some light to separate the subjects from the background. This was accomplished by two more speedlights, one back about 20 feet shooting directly at the back of the actors and one off camera left.

This didn’t work out as well as I would have liked. The Deadites behind Ash were kind of lost in shadow. So, I took the mid-light and modded it with the Magsphere from MagnetMod. This was placed behind Ash in the midst of the Deadites coming behind him.

In the end, I’m really happy with how the images turned out. The cast completely got what we were going for. A little post-processing and I think we did credit to the original movie images. 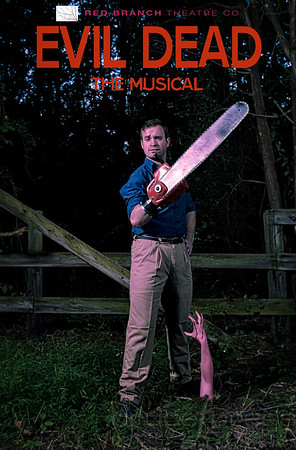 In order to get the look I wanted, I added a ton of local contrast, blue to the background and magenta to the highlights. Here, you can see the before/after: 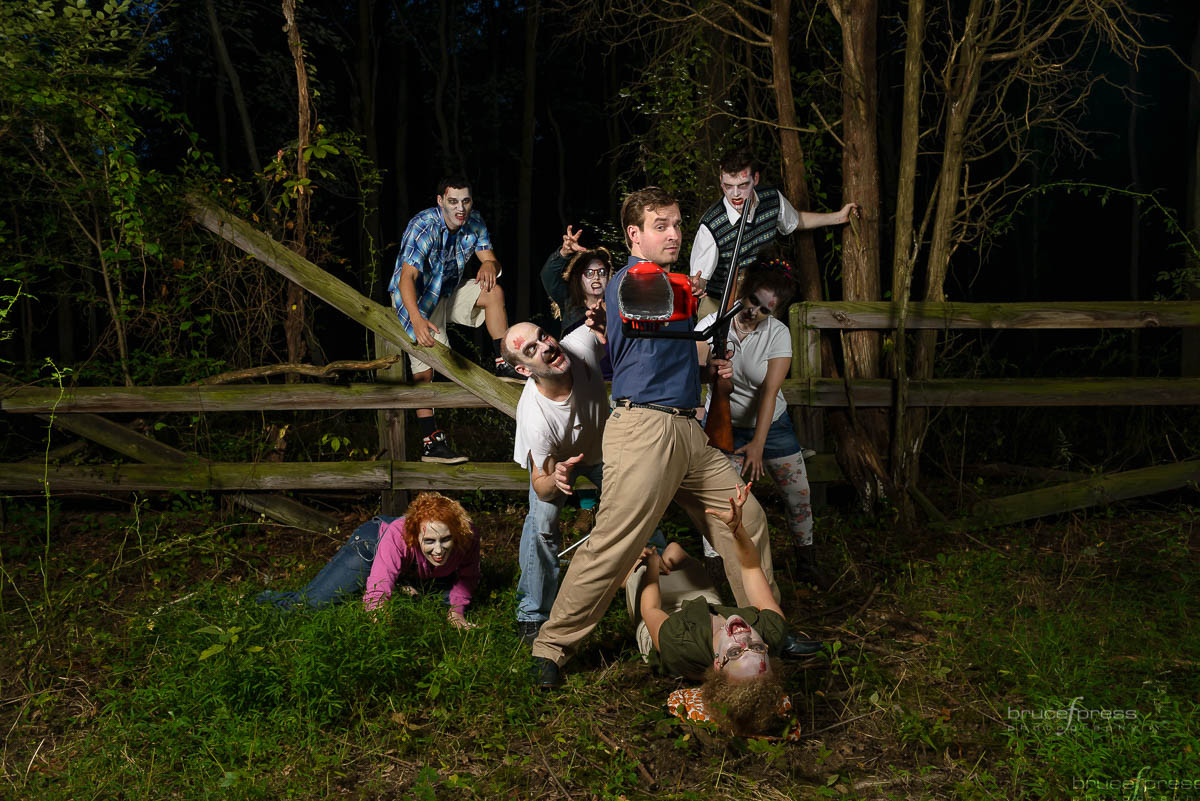 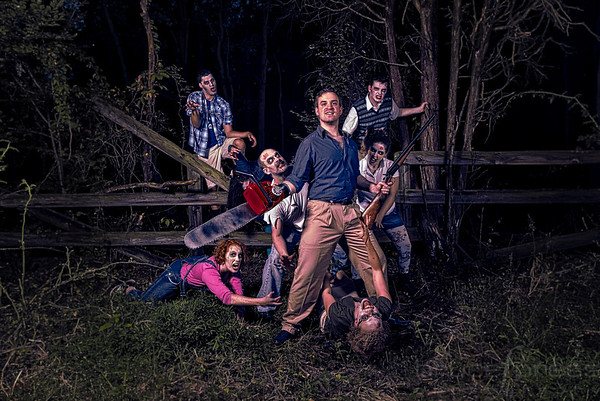 As always, I want to thank the folks at Red Branch for their trust in me and their enthusiasm for creating art of so many flavors. Thank you to Jenny Male, the director, for giving up some very precious rehearsal time and Dana Medford, stage manager, for making this all come together. This cast was great fun to work with an I think you are going to love their take on Evil Dead. Get out and support local theatre!